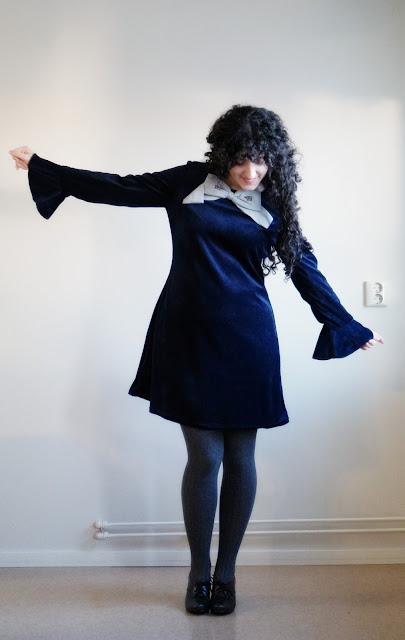 The new year has started well, and as I previously mentioned I am looking forward to this year. It's going to be an exciting year, filled with magic. Literally.

As all you Harry Potter fans out there already know this year will bring the magic back, first to the stages of London, in a play called Harry Potter and the Cursed Child, and secondly to the screens as the movie inspired by the book Fantastic Beasts and Where to Find Them.

What is so incredibly exciting for me is that I have tickets to the play Harry Potter and the Cursed Child. It was extremely hard to get by. You had to sign up on a special website to be able to attempt at getting the tickets. Then you waited to get an email on a special day, and once this day arrived you'd get a link that would put you in a queue. At a random place in the queue. You could be the first one in the queue, or the 20.000 one. I was lucky, I was the 8000-something one in the queue. 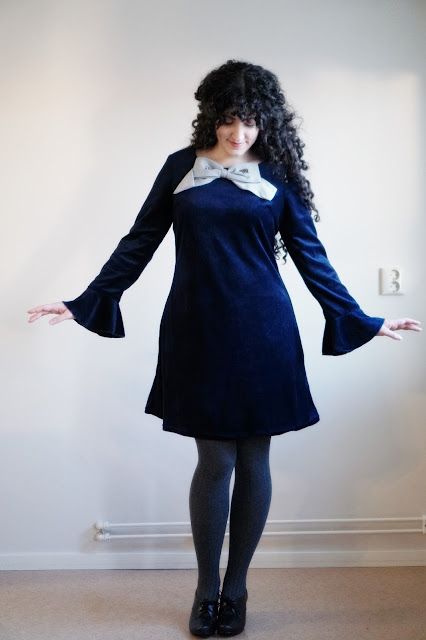 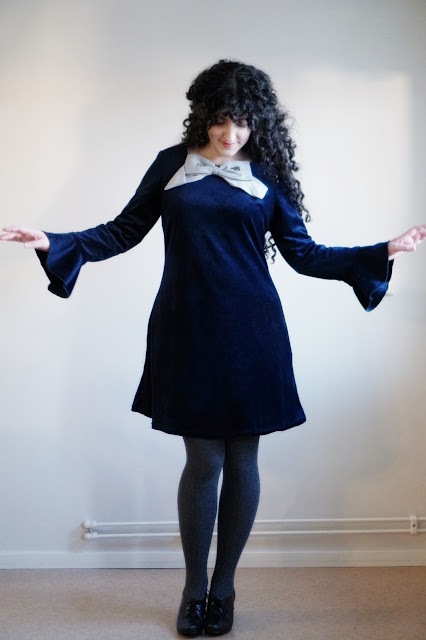 "And now we wait" - 10 points to your house if you can tell me which film and scene that is from.
But seriously then it was just a matter of waiting for the people before you in the queue to either leave the queue or get their tickets. After nearly two hours of patiently waiting and staring at the screen of my computer as a little wizard walked across the page I finally got in!

I was seconds away from getting tickets to the eight part of the Harry Potter series. It was what I had waited for, for years! 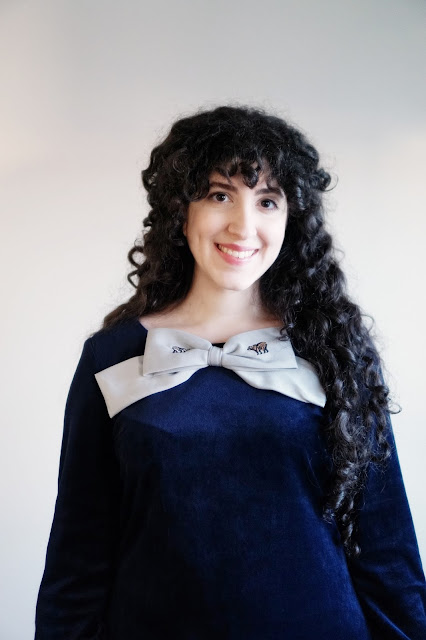 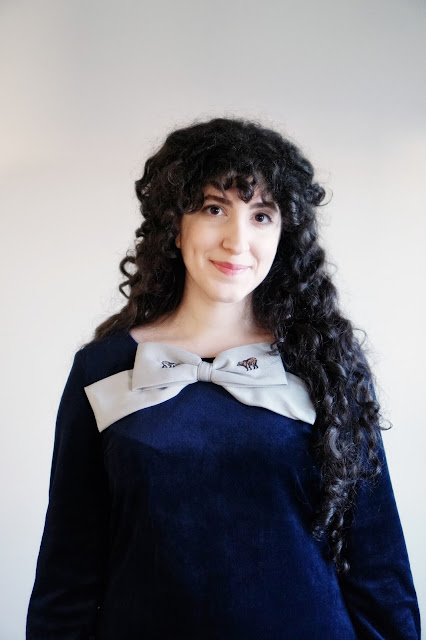 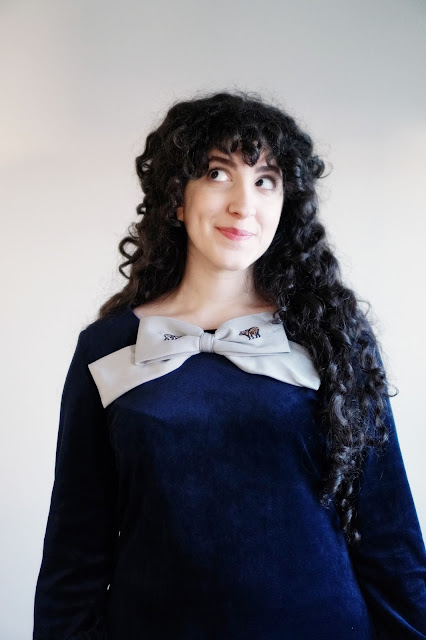 But then... It was impossible to book any dates.
"Have all the dates already been booked?" I wondered. The days were supposed to be colour coded, green meaning there was still seats available, yellow meaning there were few seats available and red meaning it was completely booked. Only for me, it was neither green, yellow nor red, but white!
That's when my clever sister quickly did an investigation (checking the play's Facebook page) and it turned out that there were other people with the same problem. We all had one thing in common... If you were using Safari on a Mac, the webpage would not work. 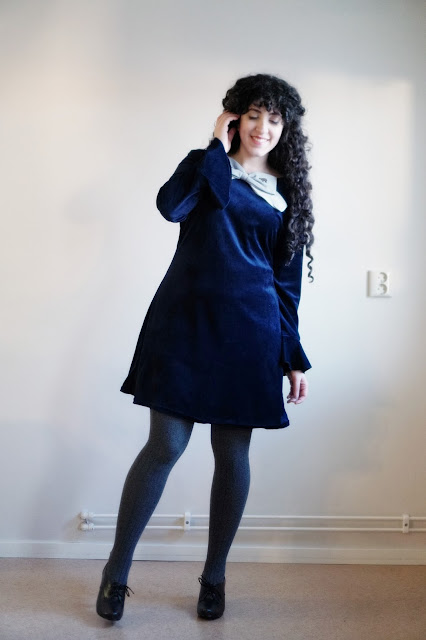 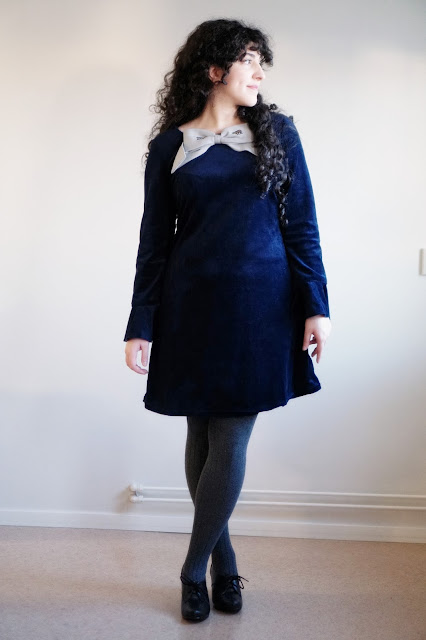 Dress: Book of Deer (sold out in this colour, but with print here)
Tights: Lindex (old)
Heels: ModCloth (here)

After panicking for a while, and desperately asking my sister to fix it in some way, we got lucky and my sister had a friend that was close to the beginning of the queue, that managed to get us tickets as well.

So there you have it! I'm going to see the play - but it sure wasn't easy getting the tickets!

But so, my 2016 will be filled with magic.
This dress that I'm wearing today is quite magical too. It's from Book of Deer, and I don't know if it is the rich midnight blue colour, the luxurious velvet fabric or the dramatic fluted sleeves, but something about this dress makes me think that it would be the perfect dress for a witch. 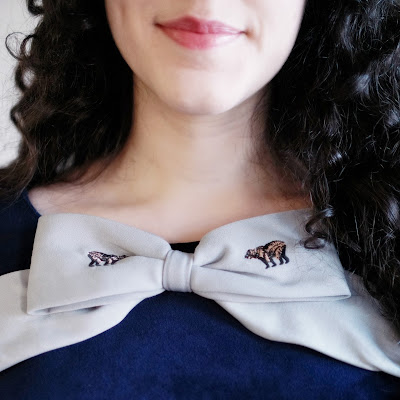 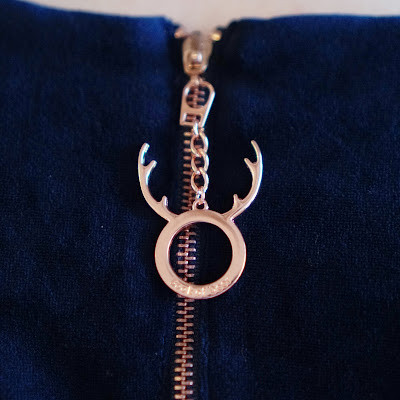 I wear it with pride as it is the lovely dark blue colour of my house (Ravenclaw), and I also think about Brave and Merida because of the wee embroidered bears at the lovely bow. There are still some items left from Book of Deer's Hibernation collection of AW14 that you'll find here. 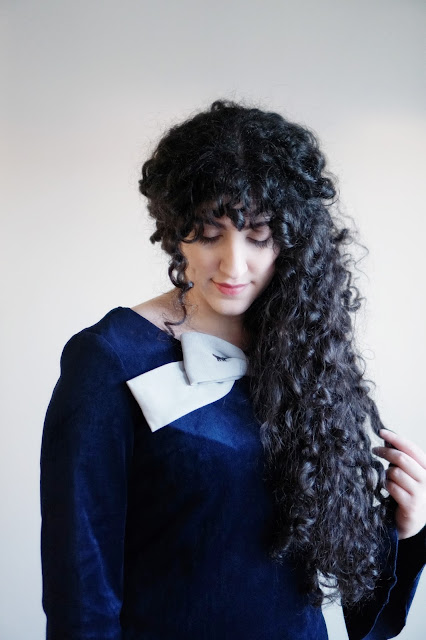 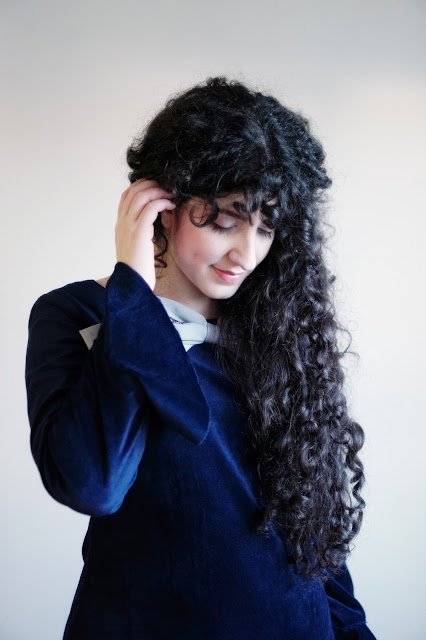 I hope you will all have as much magic in your life in this year as I will.
Much love,