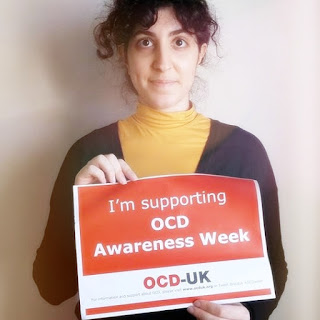 This week is the international OCD awareness week, and as it is a special occasion I've decided to write a little bit about my own OCD. This is difficult for me to be open about, but I feel like it is something that I will do at some point, so why not now?

Before I start with my own experience with OCD I want to clear things up by defining what OCD is.
OCD stands for Obsessive Compulsive Disorder and is a debilitating mental disorder and anxiety disorder. It starts with obsessions, better described as intrusive thoughts. That is, thoughts that you don't want to have, usually something that makes you highly uncomfortable. These are thoughts that persist even when you try to ignore or confront them. On an intellectual level you know that the obsession is not corresponding with reality. The obsession causes great anxiety.

Some people only have the intrusive thoughts and might have no or mental compulsions. This is called Primarily Obsessional OCD, or Pure-O. Others with OCD will perform compulsions. Whether the compulsion is mental or not, it is performed because it decreases the anxiety that is brought on by the obsession. Sometimes an OCD sufferer will have to perform a compulsion just because it "feels right". The feeling is that the compulsive action will either relieve the obsession, or it feels necessary to act on it to avoid the dreaded intrusive thoughts.

Even though sufferers usually know that the compulsions are not necessary or exaggerated they will perform them as a sort of escape from the obsession, but the relief is only temporary. Compulsions are very different from habits that are done because you want to. Compulsions are performed because you feel like you have to. Habits bring efficiency to life, while compulsions disrupt life. Which leads us to the next characteristic of OCD. Which is that sufferers spend hours performing the compulsions every day. It's not a one time thing, but it interferes with life.

So now that we know what OCD is lets talk about what OCD is not.
OCD is not a quirk, or a trait. It does not have anything to do with being neat, organised or clean. It is not a superpower (as suggested by the tv-series Monk). Using OCD or any other mental disorder as a nickname for things that people do, think or say will minimise the disorder and increase stigma. It is done a lot, especially for OCD. My favourite tv-show Doctor Who has on multiple occasions joked about and trivialised OCD. But I think it is only because people do not really understand what the disorder is. My mission is to talk about OCD now, once and for all. Talk about how disruptive and debilitating it can be. So that maybe next time you hear someone say they are "so OCD" about something you can educate them.

My own OCD started almost seven years ago. It started very mildly with me being concerned about being "clean enough". I started avoiding shaking hands and touching door handles. Five years down the line my OCD had gotten to the point where everything was contaminated in my mind, I could no longer touch or be touched by anybody. I couldn't hug my own mother. The fear of germs and contamination made life difficult to the point where I was always scared when being around people, which is almost all the time. I would spend several hours of each day cleaning myself and my surroundings only to do it again the next day. When I was at my worst I washed my hands between 90-100 times a day. It was not very strange then that my hands had transformed, becoming red, inflamed and cracked. I bled from my hands about once a day. The picture that I accidentally took underneath this text shows my hands when they were really bad, but not their worst. It is not edited in any way and it even looks less horrible in the picture compared to reality. 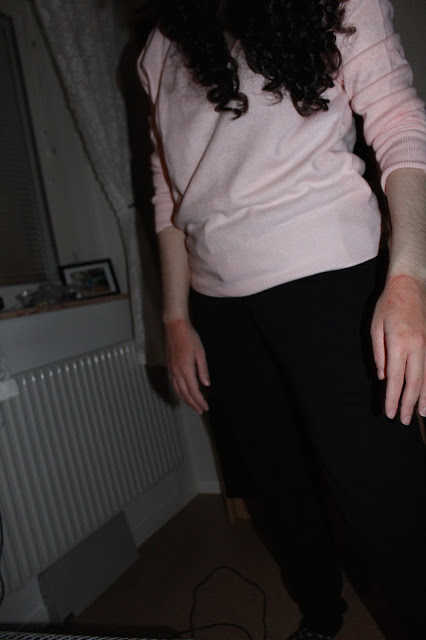 I'm not showing a picture of my destroyed hands for you to feel sorry for me. I just wanted to show you that a mental illness can become something that affects your physical health. However the physical signs of the illness is nothing compared to what is going on inside of you. The fear and uncertainty is so real, and so extreme that it occupies all of your thoughts. And with that depression often follows. Depression is often seen in people with OCD and the writer of an OCD workbook described it like this: "Indeed, having OCD can be very depressive". Which as a sufferer of both, I can only say is true. My own OCD made me not be able to leave the flat eventually. I was housebound and completely unhappy, so my depression worsened and I became bedbound because I could not find any reason to get out of bed when it was a constant of cleaning and washing that was waiting for me. When I was at my worst I was suicidal, because I felt trapped in my mind and in my compulsions. The OCD affected and controlled all parts of my life. I had rituals for everything. I had to eat a certain way, wash a certain way, sleep a certain way, walk a certain way, just being was dictated by my illness. My life consisted of fear, anxiety, dark thoughts and my compulsions. It really was no life worth living at all...

I am very happy to be able to write that I am better now. I take two different types of medications against my OCD and depression and have started therapy successfully. I want all of you to know that you can hit rock bottom and then go even further down like I did and yet find a way back. I'm not cured, I still struggle with my OCD every minute of every day, but I have methods of coping, and I feel more free. That's why it is so important to talk about mental health, mental illness, suicidal thoughts, treatments and help. Because there is help out there!


If you want to know more about OCD I suggest that you check out the International OCD foundation: IOCDF

Another great place to quickly learn more about OCD is: That's OCD

This video by Hank Green and Crash Course also does a great job of describing the disorder and anxiety:


I hope you now understand what OCD is, and what it is not. I hope I have an ally in you in the fight against the stigma that is associated with mental illness. And I hope that you will carry on educating people and raising awareness about mental health and OCD.